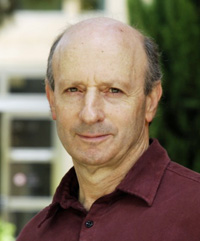 Starting in the late 1970s, I began working in the then-emerging field of “complex fluids,” concentrating over the following two decades on developing molecular theories of liquid crystals, polymer solutions, colloidal and nanoparticle suspsensions, self-assembling systems, and biological membranes. About 10 years ago I became intrigued by the physical basis of viral infectivity and, with my colleague Charles M. Knobler, established a laboratory to investigate a wide range of viruses outside their hosts and isolated in test tubes. We work on both DNA and RNA viruses, attempting to identify and explain the generic differences in their “live cycles” in terms of the differences between stiff linear genomes (double-stranded DNA) and flexible branched ones (single-stranded RNA). In particular, we have focused on the role of pressure in DNA packaging and delivery, and on the role of spontaneous self-assembly in the case of RNA viruses. A large part of our effort is devoted to understanding the physical forces driving the syntheses of viruses and virus-like particles (i.e., single-molecule-thick protein shells [capsids] containing nucleic acid), and their wrapping by phospholipid bilayer. Experimental methods include fluorescence microscopy and correlation spectroscopy, small-angle synchrotron X-ray scattering, and cryo-electron microscopy; theoretical approaches involve both analytical and computational treatments of RNA structure and of the statistical thermodynamics and kinetics of nucleocapsid self-assembly.

After completing my formal education (Harvard B.S. [1967], University of Chicago Ph.D. [1970], and NSF and Miller Institute postdoctoral fellowships at the University of Paris [1971] and UC Berkeley [1972]), I joined the faculty at UC Berkeley in 1972 as an Assistant Professor of Chemistry, moving as Associate Professor in 1975 to UCLA, where I have served as Professor since 1979, Chair (2001-4), and Distinguished Professor since 1999. I am also a Member of the California NanoSystems Institute and of the Molecular Biology Institute.