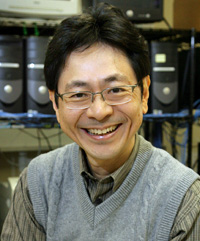 My prime interest is to understand the origin of the Universe, life and consciousness altogether by yet-to-be-discovered physics laws. In particular I am interested in how the Universe was evolved at its earliest stage. I have been conducting several research studies in Europe and in the U.S. 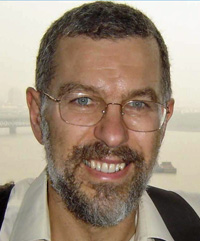 My research interests span from single molecule biophysics to evolution via the study of development. I have been studying the mechanical properties of single DNA molecules for the past 20 years, using those as a means to investigate its interactions with a variety of structural proteins and molecular motors. Recently, we discovered a new means to sequence DNA by mechanically unzipping it and detecting the hybridization of complementary oligonucleotides as they transiently block its re-zipping. In the past 5-6 years I have been interested in the study of physiology at the single cell level. We have developed means to control the activity of proteins and other biomolecules at the single cell level, which gives us the opportunity to perturb locally and temporally various physiological pathways which we are currently studying (somitogenesis, learning, cancer). Finally, I have been interested in experimental evolution and bacterial ecology. We have recently shown that the dynamics of exchange of public goods in a bacterial colony is similar to a continuous version of the Tit-for-Tat game. 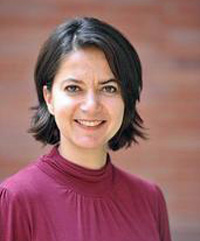 The Bozovic lab focuses on problems at the interface between physics and sensory neuroscience. In particular, we study how auditory and vestibular systems perform mechanical sensing down to the nanometer level. The main topics are: (1) nonlinear dynamics of response by individual elements - the hair cells, (2) synchronization of movement by inter-cell coupling, and (3) self-tuning in response to external stimulus.

The experiments require measuring bundle motility with nanometer-level precision, in preparations that preserve the biological function of the cells. Our measurement system includes parallel-tracking ability, allowing us to explore synchronization between active motility of different hair cells. We interpret our findings in the context of nonlinear dynamics and bifurcation theory, to explain the nanoscale sensitivity displayed by the biological system.

Dept. of Physics and Astronomy and California NanoSystems Institute, UCLA 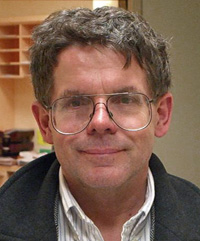 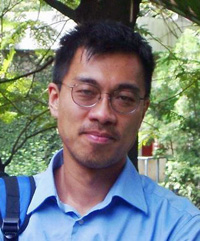 I am interested in developing mathematical and physical models of stochastic processes applicable to subcellular and cellular biophysics. Some mathematically more formal research interests include determining uniqueness of stochastic inverse problems, such as branching processes. My applied research interests focus on developing mathematical models of viral entry and infection, cancer progression, and retinal detachments. My group is also investigating computational algorithms for the segmentation of images of tissues and bacterial cells. 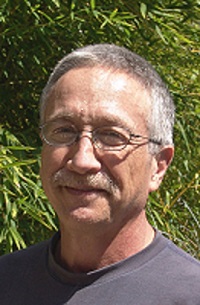 Interests: All meaningful actions of the brain result from the orchestrated activity of many neurons. A central problem confronting neuroscientists is to understand how molecular, synaptic, and cellular properties of individual neurons in densely interconnected networks result in behaviors ranging from hitting a baseball, playing the piano, reading or writing a book, taking an exam, regulating blood pressure or reproduction, or doing research. We have developed a model system that enables us to perform unique studies that directly address this problem. We investigate the neural basis for respiration in the isolated neonate rat brainstem, a preparation that offers simultaneous access to cellular, synaptic and network properties. We intend to understand how homeostatically regulated breathing movements occur, and in course, principles of integrative organization in the nervous system. We are presently testing our hypothesis that pacemaker neurons underlie the generation of respiratory rhythm. We have several projects looking at general mechanisms underlying the control of neuronal excitability (in functionally identified cells). Starting in the late 1970s, I began working in the then-emerging field of “complex fluids,” concentrating over the following two decades on developing molecular theories of liquid crystals, polymer solutions, colloidal and nanoparticle suspsensions, self-assembling systems, and biological membranes. About 10 years ago I became intrigued by the physical basis of viral infectivity and, with my colleague Charles M. Knobler, established a laboratory to investigate a wide range of viruses outside their hosts and isolated in test tubes. We work on both DNA and RNA viruses, attempting to identify and explain the generic differences in their “live cycles” in terms of the differences between stiff linear genomes (double-stranded DNA) and flexible branched ones (single-stranded RNA). In particular, we have focused on the role of pressure in DNA packaging and delivery, and on the role of spontaneous self-assembly in the case of RNA viruses. A large part of our effort is devoted to understanding the physical forces driving the syntheses of viruses and virus-like particles (i.e., single-molecule-thick protein shells [capsids] containing nucleic acid), and their wrapping by phospholipid bilayer. Experimental methods include fluorescence microscopy and correlation spectroscopy, small-angle synchrotron X-ray scattering, and cryo-electron microscopy; theoretical approaches involve both analytical and computational treatments of RNA structure and of the statistical thermodynamics and kinetics of nucleocapsid self-assembly. 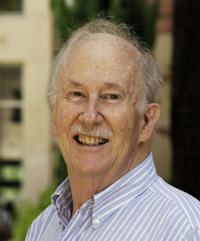 My research, almost exclusively experimental, has been in soft condensed matter physics, a field that lies at the fuzzy border between physics, physical chemistry and chemical engineering. Much of the work concerned phase transitions and included studies of critical phenomena, nucleation and growth and two-dimensional systems, largely monolayers at the air/water interface.

About 10 years ago, however, I and my colleague Bill Gelbart made an abrupt change and began to focus on viruses. We have played a major role in the development of the new science of physical virology in which the properties of viruses – their structures, their assembly, their replication and their mode of infection – are examined both experimentally and theoretically in terms of general physical principles. Our research is broad based and involves studies of bacterial, plant and mammalian viruses. Alex Levine completed his Ph.D. in physics at UCLA in 1996. Following postdocs at Exxon Research & Engineering, UPENN, and UCSB, he joined the physics department of the University of Massachusetts, Amherst as an assistant professor. In 2005 he returned to UCLA where he is now a professor of Physics & Astronomy, Chemistry & Biochemistry, and the director of the Center for Biological Physics. His main research interests involve statistical physics, mechanics of disordered elastic systems, and the dynamical phase behavior of interacting neurons. His principal work in biological physics involves the mechanics of the cytoskeleton, hydrodynamics and transport in membranes, and theoretical neuroscience. 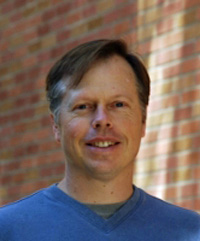 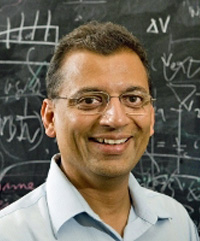 The mind is thought to be the emergent property of the activities of ensembles of neurons. The nature of these emergent properties and how they arise are unknown. This is the focus of our research. In particular, our current research addresses fundamental questions in Neurophysics. My research interests lie in the interplay of physics, nanoscience and biology. I am particularly interested in developing new physical methods for quantitative imaging of nanoscale materials and biological specimens in three dimensions. I have played a major role in pioneering a three-dimensional imaging approach based upon the principle of using coherent diffraction in combination with a method of direct phase recovery called oversampling. I, together with my graduate students and postdocs, will continue to improve the spatial resolution of this imaging technique and pursue its applications in nanoscience and biology by using optical lasers, coherent X-rays and electrons. Some of my work is in areas germane to theoretical biology, including population genetics, demographic models, dynamical systems theory applied to ecological systems, physiological models of brain tumors, stochastic models for animal populations, and the origin and evolution of life. (I created EPSS 3 "Astrobiology" many years ago and formerly taught courses dealing with the Origin and Evolution of Solar System and Earth. More recently, much of my research has focused on natural hazards, including climate change, and a course I created EPSS 13 "Natural Disasters.") Dr. Amy Rowat’s lab is interested in the material properties of biological matter, the origins of this behavior and role in physiology. Their research efforts largely focus on the shape and mechanical properties of the cell nucleus: they want to understand the role of nuclear physical and mechanical properties in whole cell mechanics and physiology and ultimately the physical and molecular origins of these properties. Rowat’s multidisciplinary team is addressing these questions by developing and merging methods in physics, engineering, cell and molecular biology. Developing a quantitative framework to understand mechanical transformations in cancer cells could provide a deeper understanding of cell nucleus shape and mechanics, as well as methods for early detection and mechanical-based therapeutic approaches. Amy Rowat is Assistant Professor in the Department of Integrative Biology & Physiology. She is also affiliated faculty with the UCLA Bioengineering Department, the Jonsson Comprehensive Cancer Center, and the Broad Stem Cell Research Center. 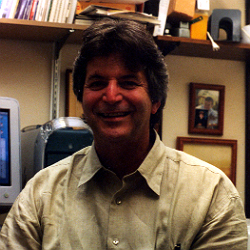 Research Interest: I do research on a variety of problems in condensed matter physics. My primary interests are in the general field of statistical mechanics. Following are some of the areas in which I've done research in the past few years. 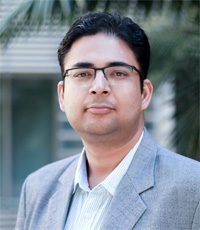 Samanvaya is an Assistant Professor in the Chemical and Biomolecular Engineering at UCLA. He completed his undergraduate and master's work from the Indian Institute of Technology Kanpur and his Ph.D. with Lynden Archer from Cornell University, all in Chemical Engineering. Before coming to UCLA, he was a postdoctoral scholar with Matthew Tirrell at the Pritzker School of Molecular Engineering at the University of Chicago.

Samanvaya's research interests are in understanding the influence of intermolecular interactions on material structure and properties, with a broader aim to combine this fundamental understanding with molecular engineering and self-assembly processes to improve materials design. Samanvaya has received various awards, including the Austin Hooey Graduate Research Excellence Recognition Award at Cornell University (2013), the RSC Researcher Mobility Grant (2017), AIChE 35 under 35 (2020), and the NSF CAREER award (2020). His current research interests can be found here: https://sites.google.com/site/tserkovnyak Interests: I am interested in biophysical systems where collective responses emerge from a large and structured collection of interacting components. Two systems of main focus are the adaptive immune system (diverse populations of immune cells undergoing real-time evolution to fend off invaders and form memories) and active matter (a condensed matter system comprised of numerous self-driven subunits). Internally propelled or externally driven, these systems fall out of equilibrium, while being strongly nonlinear and heterogeneous in space and time. In addition, function and survival pose interesting constraints on their dynamics and organization. As a result, surprisingly complex (e.g. for adaptability) or simple (e.g. for robustness) behaviors arise that often defy intuition.

We aim to understand how biological success selects physical organizations, as well as how the physical structure feeds back on adaptation to environmental uncertainty. This understanding would guide novel design of vaccine strategies and adaptive materials. Shimon Weiss received his PhD from the Technion in Electrical Engineering in 1989. After a one year post doctorate at AT&T Bell Laboratories, where he worked on ultrafast phenomena in semiconducting devices, he joined Lawrence Berkeley National Laboratory as a staff scientist in 1990, where he continued to work on solid state spectroscopy. In 1994 he re-directed his interest to single molecule biophysics. In 2001 he joined UCLA Chemistry and Physiology departments and the California NanoSystems Institute.