The natural scenes and sounds we encounter in the world are highly structured. The fact that animals and humans are so efficient at processing these sensory signals compared with the latest algorithms running on the fastest modern computers suggests that our brains can exploit this structure. We have developed a sparse mathematical representation of speech that minimizes the number of active model neurons needed to represent typical speech sounds. The model learns several well-known acoustic features of speech such as harmonic stacks, formants, onsets and terminations, but we also find more exotic structures in the spectrogra representation of sound such as localized checkerboard patterns and frequency-modulated excitatory subregions flanked by suppressive sidebands. Moreover, several of these novel features resemble neuronal receptive fields reported in the Inferior Colliculus (IC), as well as auditory thalamus (MGBv) and primary auditory cortex (A1), and our model neurons exhibit the same tradeoff in spectrotemporal resolution as has been observed in IC. To our knowledge, this is the first demonstration that receptive fields of neurons in the ascending mammalian auditory pathway beyond the auditory nerve can be predicted based on coding principles and the statistical properties of recorded sounds. We have also developed a biologically-inspired neural network model of primary visual cortex (V1) that can learn a sparse representation of natural scenes using spiking neurons and strictly local plasticity rules. The representation learned by our model is in good agreement with measured receptive fields in V1, demonstrating that sparse sensory coding can be achieved in a realistic biological setting.

In addition to the role of RNA as messenger and carrier of amino acids, and its central role in the function of the ribosome, small RNA molecules are becoming increasingly implicated in the machinery for control of gene expression. We will discuss structure-function relationships for a number of small functional RNAs, including riboswitches where binding of a small metabolite molecule induces conformational changes leading to direct control of transcription and/or translation of specific genes. Because of the highly charged phosphate backbone of polynucleotides, the biophysics of allostery in RNA molecules is very different from allostery in proteins, of which the transition between oxy- and deoxy- hemoglobin is a classic example. We will show that allostery in functional RNAs leads to major conformational changes, not just in terms of tertiary structure as is the case for proteins, but also in terms of major changes in the secondary structure hydrogen-bonding motifs. In this sense, it may be argued that allosteric-induced changes in RNA are a more primitive control mechanism than in protein reactions where a fraction of an Angstrom displacement of active groups can make a big difference in function. So RNA biophysics may be said to be closer to the origins of life, as in the hypothetical "RNA world".

Axonal transport is an essential process in neurons by which mitochondria, organelles, proteins, and other cargos are transported by motor proteins along microtubules (MTs) from the cell body to the synapse and back. Although intracellular transport is important in a wide variety of cell types, it is particularly important in neurons, whose elongated shape makes them an excellent model system for long-distance transport. The biophysical and biochemical properties of isolated motor proteins, such as kinesin, have been extensively studied at the single-molecule level. However, in cells, kinesins move along microtubules that have been coated with numerous other microtubule-associated proteins (MAPs), and whether and how these MAPs impact axonal transport is still largely unknown. In this talk, I will present an overview of my laboratory’s efforts to better understand the regulation of axonal transport through physical interactions of kinesins, MAPs, and microtubules. Using fluorescence microscopy and optical trapping, we determine how motor speed and travel distance are influenced by the concentration and type of MAP present. We also determine the effects of MAPs on microtubule stiffness using a spectral analysis of the thermal fluctuations of filament shape. In particular, I will present our recent characterization of tau, a MAP that is required for normal neural function and has been implicated in a number of neural diseases, including Alzheimer’s disease.

The cell contains specialized gene circuits that enable it to respond to specific inputs, including extracellular signals and stresses. Despite increasingly comprehensive knowledge of the molecules and interactions that comprise these circuits, it usually remains unclear how a given input is represented dynamically inside the cell, and what capabilities these dynamics provide. In order to address these issues, we are analyzing key circuits dynamically at the level of individual cells, in bacteria, yeast, and mammalian systems. The approach combines quantitative time-lapse microscopy, synthetic biology, mathematical modeling, and synthetic biology. I will discuss the unexpected, often noisy, intracellular dynamics that we have observed in studies of both prokaryotic and eukaryotic cells, and show how they arise from specific features of underlying circuit architectures. I will also discuss how these dynamics enable critical regulatory and developmental functions. 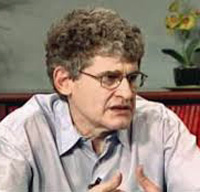